In response to the new crown pneumonia epidemic, four teachers from the Department of Civil Engineering Lin Weiyan, Department of Urban Planning and Spatial Information Xu Yixiang, Guan Zhiwei and Lai Zhengwei of the GIS Center developed an automated information system that can accurately list high-risk infected persons. Through the front-end "Footprint Tracking App", the user's movement track is regularly recorded. Once a confirmed person appears among the users, the epidemic investigator can use the back-end "risk analysis platform" to quickly and accurately list people close to the confirmed case based on time and space conditions. Those who are at high risk of being in contact for a long time should be quarantined to prevent the spread of the virus.

The main function of the overall system is to use the APP to digitally record the user's footprints, and to improve the shortcomings of the current artificial epidemic investigation methods that rely on the memory of the confirmed person. In addition to drastically reducing the manpower and time required for the current epidemic investigation, it also implements "advance deployment" for community transmissions that are unpleasant to occur. It can also list potential infected persons that cannot be traced by the current epidemic investigation methods. This kind of early warning information can be sent to high-risk infected persons who really need it to avoid unnecessary panic.

The research and development of this system was first started by teacher Lin Weiyan of the Civil Engineering Department. In view of the spread of the outbreak in the European and American communities, the collapse of the medical system caused the epidemic to be out of control. I didn’t want the same situation to happen in Taiwan, so I started building a teacher growth group in the college. In the group discussion, I hope to gather the profession of teachers and colleagues in the school to contribute to the epidemic prevention. This idea immediately received an enthusiastic response from the teachers. Mr. Guan Zhiwei from the GIS Research Center was responsible for the development of the front-end footprint tracking app. Later he joined the planner Lai Zhengwei and Mr. Xu Yixiang, who developed the version of the battle situation dashboard. After a month of hard work, the four teachers successfully developed an APP and risk analysis platform.

The key to the success of this system is the indoor footprint. Previously, indoor positioning technology was not mature. The APP developed by Feng Chia can accurately track indoor footprints, which is considered a technological breakthrough. At the same time, accurately recording your own footprints digitally is actually a kind of invisible protection. The system only informs those potentially high-risk infected persons when necessary. Not only will it not cause unnecessary trouble, it will not be necessary to announce the infringement of the confirmed person’s footprint. The privacy of the people.

President Li Binggan highly praised the automatic enlistment system that teachers and colleagues have spontaneously established, which not only exerts the spirit of benefiting others, but also contributes to Taiwan's epidemic prevention work and contributes to the university community. At present, the school has incorporated this system into a part of its independent health management system, and encourages teachers and students throughout the school to install a footprint tracking APP. It is hoped that it will be promoted to the whole country in the future, and the code will even be open sourced and shared with the international community.

APP is installed on a voluntary basis, and the overall implementation process is shown in Figure 1. Since indoors are the main source of the high-risk scenarios of the "close and long-term" of the new crown virus, outdoor footprints alone cannot effectively list high-risk infected persons. The APP developed by our team (shown in Figure 2) has been tested and can record footprints that include "outdoor and indoor" at the same time. The elevation error is about one floor (3~5m). The back-end analysis platform uses the visual aid of the 3D building cloud scene (as shown in Figure 3) to provide spatial awareness of the epidemic investigator when assessing the risks of confirmed and potentially infected persons. 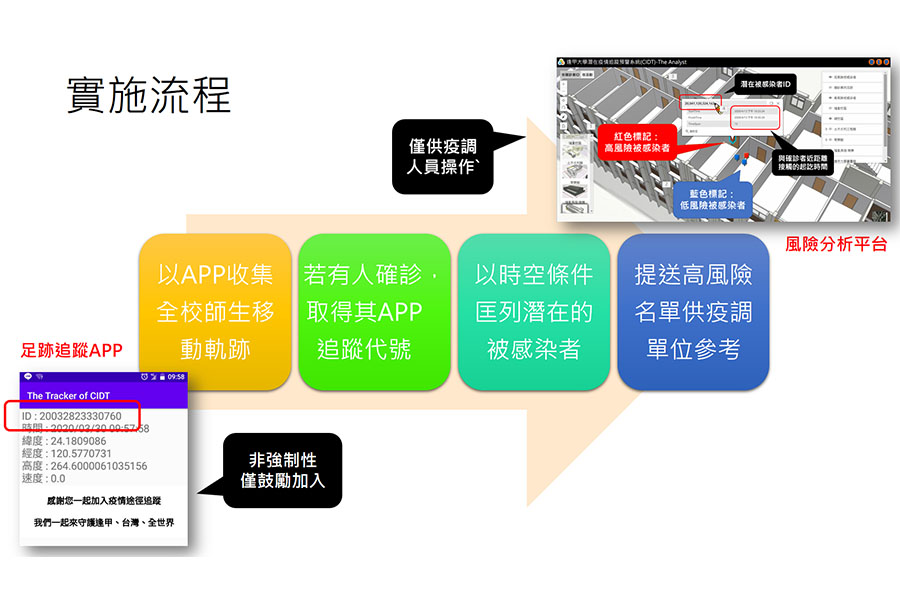 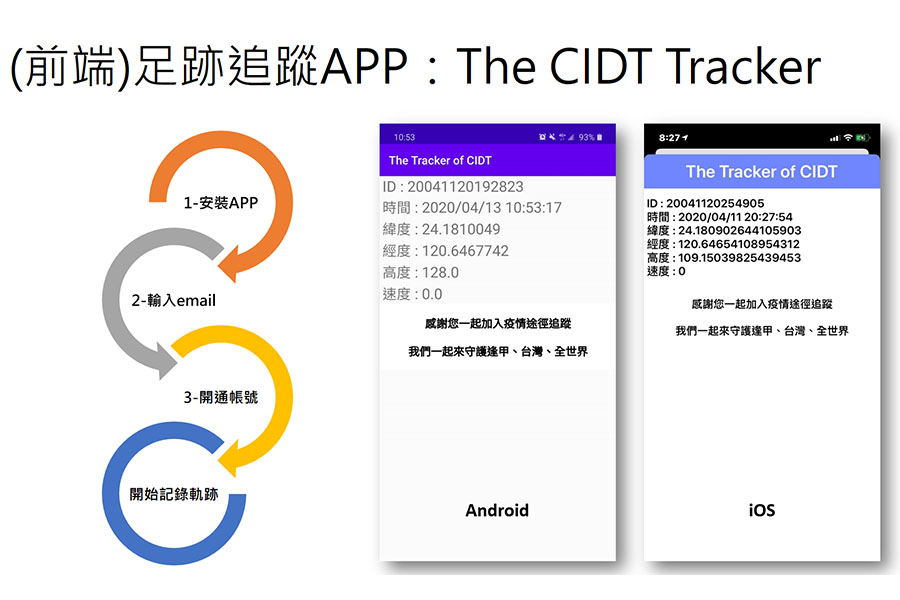 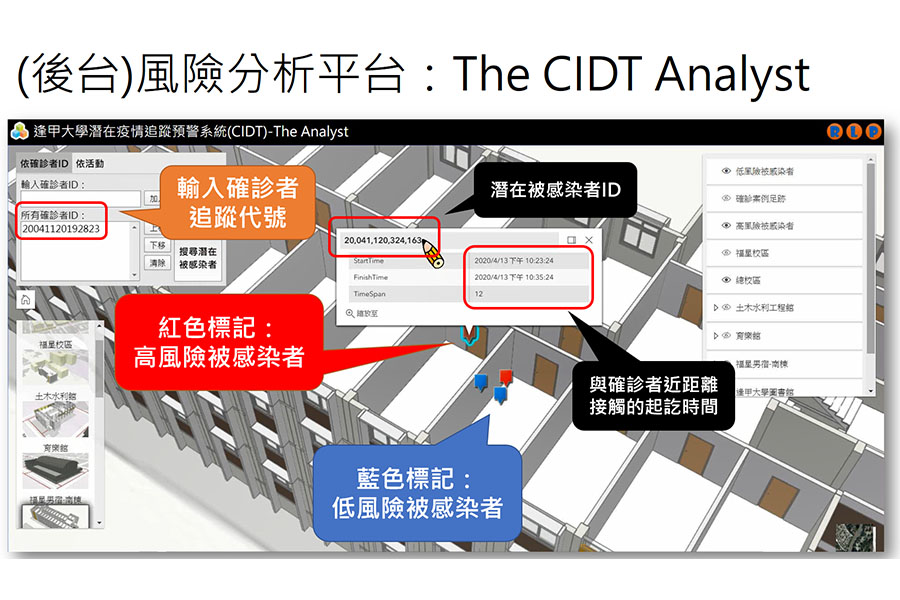 Corner to the World Officially Opened

The site on the right side of the first floor of the library has a new landscape and a new image! The original Apple Regional Education and Training Center was moved to the second floor of Administration Building 1. After remodeling, the bright, refreshing and carefree space was transformed into "Corner to the World". It was officially opened on April 14.

2017 The opening ceremony of the summer joint university of the four universities across the Taiwan Straits and three places was grandly held on July 17 at the Human Language Education Innovation Center of Feng Chia University. Supervisors from four important universities and more than 300 students from the three places gathered together. One session kicked off this year's leapfrog learning platform. These students with different backgrounds and different majors will gather at Feng Chia University to experience mobile learning in a 12-day course and jointly cultivate cross-field and cross-regional problem-solving skills.